A Fine Place reached a quarter of a million “listens” in its first week!

Taja’s latest release, A Fine Place, is touching hearts around the world. 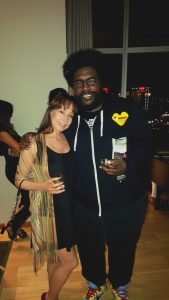 Little Diva reached Top 30 on the Billboard Dance Club Charts in the U.S!

Belber, the iconic heritage handbag and luggage company, joined up with Taja Sevelle for the U.S. launch of Taja’s new song, Little Diva. In April, 2017.

Currently recording under her independent label, Matrix Music, Taja’s new music is available on Amazon,  iTunes and other online outlets.

The first song Taja wrote, Love is Contagious, became a charted Billboard hit in America and Europe, reaching Top7 in England. Taja has written songs with renowned writers around the world including, Burt Bacharach, Thom Bell, Prince and Nile Rodgers.  She has singing and songwriting credits on over 3.5 million CDs sold.  Subsequent to her deal with Prince, after a bidding war with 9 major record labels, Taja signed a deal with Sony 550, and released her third CD, Toys of Vanity.