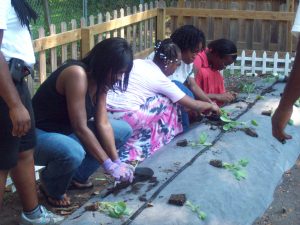 Taja Sevelle founded Urban Farming, a 501c3 in 2004-2005 with the mission to “Create an Abundance of Food for All in Our Generation.”  The organization began by planting 3 community gardens of free food in Detroit. There are now over 65,500 gardens in 61 countries around the world that are a part of the Urban Farming Global Food Chain®.

The work of Urban Farming ignited a global movement and has been featured on the Ellen DeGeneres Show, Good Morning America, CNN, NPR National, the BBC, Fox National, USA Today, The New York Times and over 30,000 other media outlets.

Urban Farming has also garnered support from several celebrities, including Prince, who donated a portion of his perfume sales to Urban Farming, performed a benefit concert for the organization in New York, and generously donated each year to the cause.  Other notable celebrity supporters include: Rapper/Actor T.I., Comedian/Actor Richard Lewis and his wife, Zac Brown Band, Keke Palmer, and Ed Begley Jr., among others.

Taja and Urban Farming are featured on Urban Conversion (PBS, Create TV) and with Forest Whitaker and Quincy Jones III in the documentary, Feel Rich.(Netflix)

The Urban Farming mission is to create an abundance of food for people in need by planting, supporting and encouraging the establishment of gardens on unused land and space while increasing diversity, raising awareness for health and wellness, inspiring and educating youth, adults and seniors to create an economically sustainable system to uplift communities around the globe.

The Urban Farming Global Vision is to “Create An Abundance of Food for All in Our Generation.™” Urban Farming empowers and encourages people to grow their own food and to transition into a greater awareness of health and wellness in their lives.  Growing one’s own food can help move people out of dependency modes and into independent thinking and acting.  The simple act of growing food can cut down on individual or family food bills and helps to alleviate the need for massive amounts of public funding for food assistance.  It also contributes to good health and good stewardship of our planet.  Urban Farming is a holistic global vision that sees a future in which good health, innovation, and productivity are an inherent part of our lifestyle.  The Urban Farming web site serves as a hub and a network to connect people around the world with meaningful tools and information.